Without a doubt, Abingdon is one of the most unique and charming towns in Virginia. Yet it had never developed a comprehensive tourism brand strategy. Abingdon is best known as the home of Barter Theatre, a historic theatre whose stage has been graced by Gregory Peck, Ernest Borgnine, Patricia Neal and dozens of other show business luminaries. The town’s many other tourism assets were not as well known. Mikula-Harris was hired to develop a compelling brand that told Abingdon’s complete story.

The Abingdon Convention & Visitors Bureau understands how important good research is to formulating an effective strategy. An analysis of Abingdon’s tourism strengths, its lodging inventory, visitor profiles and more was already underway when Mikula-Harris was hired. The extensive data we received helped ensure that our creative work contained the right message and was targeted at the right audience.

The data showed that the most visited attraction in Abingdon is Barter Theatre. The Virginia Creeper Trail (a 34-mile rail-to-trail project popular with bikers and hikers), The Martha Washington Hotel & Spa and Heartwood round out the top four tourism drivers.

Our team considered that data along with the full inventory of Abingdon’s other tourism assets and formulated a comprehensive brand strategy and a creative promotional campaign. Each of the four major tourism drivers, as revealed in the research, is viewed as the high-profile leader of a category. Barter Theatre is representative of Abingdon’s vibrant arts & culture scene, which includes performing, visual, literary and other artistic disciplines as well as historic and cultural assets. The Virginia Creeper Trail leads the region’s infinite outdoor recreation opportunities. The Martha Washington represents not only a culture of hospitality but also many unique lodging options like B&Bs and cottages. Heartwood is an example of how Abingdon embraces its history and culture including traditional music, local cuisine and more. 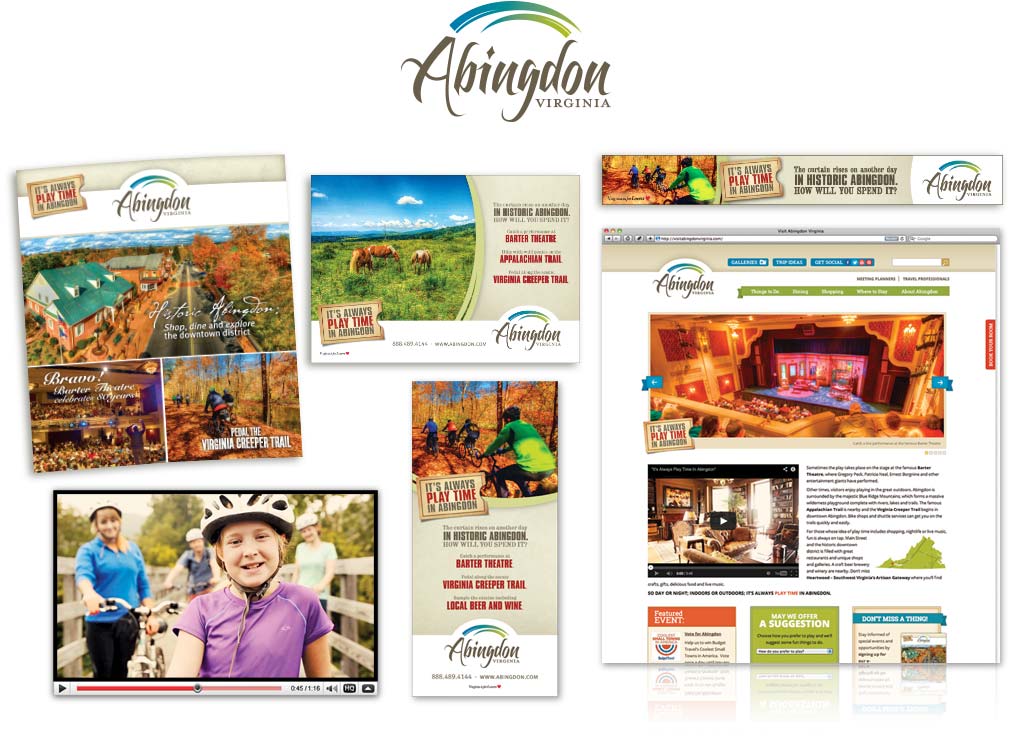 The new ad campaign perfectly portrays the new brand strategy. It embraces the wonderful role that Barter Theatre fills in the community while also pointing out the many other fun activities to do while visiting. “It’s always play time in Abingdon” is a versatile campaign that can be targeted at outdoor recreation, girlfriend getaways and other niche markets.

In addition to the new advertising campaign, a stunning new Visitor Guide has been introduced. Unlike other visitor guides, Abingdon’s new guide features a layout that is more like a small magazine with editorial features that tell the stories of the community’s tourism draws.

The Mikula-Harris Team tackled this project in a fashion that I appreciate in a creative firm — using a methodical, research-based analysis that leads to a spot-on interpretation of what makes our community stand out from the crowd. And then taking it a step further by designing a soon-to-be award winning ad campaign, logo and visitor guide, as well as our very popular shopping and dining map. I can’t wait to see the website.