The Vinton War Memorial has special meaning to the residents of this small town. It was built in 1948 to honor those who made the ultimate sacrifice in service to our country. The stately brick building was a favorite place for residents to hold meetings, bridal showers and weddings. With a major renovation underway in 2006-2007, the Vinton War Memorial was poised to become a major player in the region as a special event venue. To successfully market the facility, several major obstacles needed to be overcome. First was that the quaint Town of Vinton seemed to be an unlikely location for the Roanoke Valley’s premier and most technologically advanced meeting facility. Perhaps the greatest challenge, however, was the name, which sometimes led people to assume the Vinton War Memorial was a monument.

The first step was to develop a totally new brand identity. A logo was created featuring an iconic mark representing the letters VWM. The new logo gives more prominence to the word “Vinton” and less emphasis to the words “War Memorial.” The tagline “An Elegant Event Venue” was adopted to directly address the misconception of the War Memorial name. A second strategy was to let people see the spectacular results of the renovation for themselves. On our recommendation, the client made an investment in top-quality professional photography. A small brochure was created for mass distribution, while a more elaborate version was created for those planning bigger events. The two brochures along with a website, print advertising and a trade show display consistently portray the elegant nature of the Vinton War Memorial. 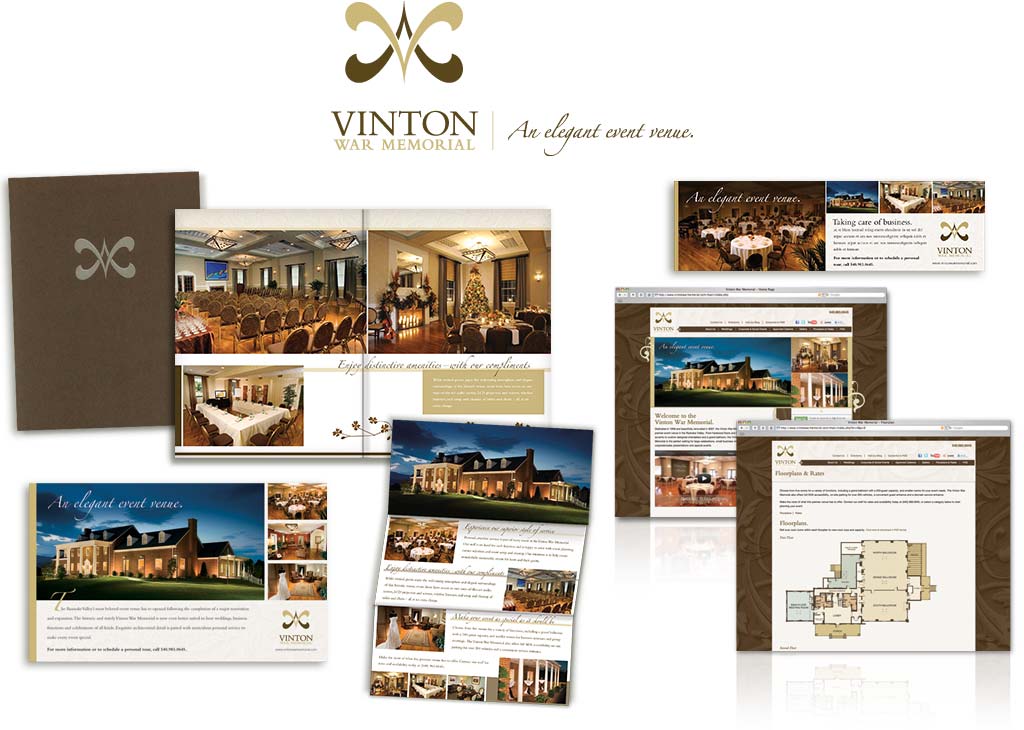 An aggressive marketing campaign and some good local media coverage marking the completion of the renovation have contributed to excellent brand awareness for the facility. Inquiries and requests for brochures came in faster than the staff could handle. The result is that weddings or other special events are now booked for nearly every weekend through the end of the year. One particularly stunning image from our three-day photo shoot of the building has become the unofficial image of the Town of Vinton. The Vinton War Memorial has reclaimed its place in people’s hearts, not only as a cherished landmark honoring veterans, but also as a favorite place to celebrate special events.

Developing a new brand image for the Vinton War Memorial that would capture the elegance and grandeur of the newly restored facility was such a daunting task that I was tempted to select a larger, flashier firm for the project. During early meetings, Mikula-Harris displayed enthusiasm for the challenge and a thorough understanding of our situation. Now, I truly feel that we could not have made a better choice. The service, attention to detail and overall guidance throughout the brand development process led to a wonderful working relationship. Each member of the Mikula-Harris team brought fresh, innovative contributions to the campaign. The compliments and ‘wow factor’ that our marketing materials continue to receive speak volumes about the quality and service that Mikula-Harris provided.