Hardy County in the mountains of eastern West Virginia was having an identity crisis. Their newly formed CVB and board knew instinctively that they had much to offer visitors. They just had to figure out how to sell their county as a destination. Hardy County consists of two incorporated towns and several tiny, unincorporated ones. Moorefield is the county seat and center of commerce. Wardensville is a small but hip town that happens to be located on a heavily traveled route between DC and other West Virginia destinations like Seneca Rocks and Canaan Valley. There is also a region of the county known as The Lost River Valley. Though it is breathtakingly beautiful and home to several award-winning inns that draw many repeat customers, The Lost River Valley does not appear on an official state map.

The Mikula-Harris team brought an unbiased perspective to this challenge. To develop a brand that was both true to Hardy County’s strengths and also differentiated from nearby destinations, we relied heavily on good research. We also spent some time exploring the county from end to end. We conducted surveys of stakeholders and visitors. We found that an overwhelming number of visitors referred to their trip as a visit to the Lost River Valley. The research also showed that people visited to relax and enjoy time in the peaceful mountain surroundings. While nearby destinations promote non-stop adventure, we plan to position Hardy County as the most relaxing getaway in West Virginia. In addition, The Lost River Valley will play a large role in the county’s identity. Wardensville, which is already home to restaurants and shops featuring the Lost River name, will serve as a gateway town. The abundant outdoor recreation opportunities mesh nicely with the brand strategy. Hardy County has paddling, hiking, biking, fishing and other activities, but no adrenaline rush opportunities like rock climbing or whitewater rafting. 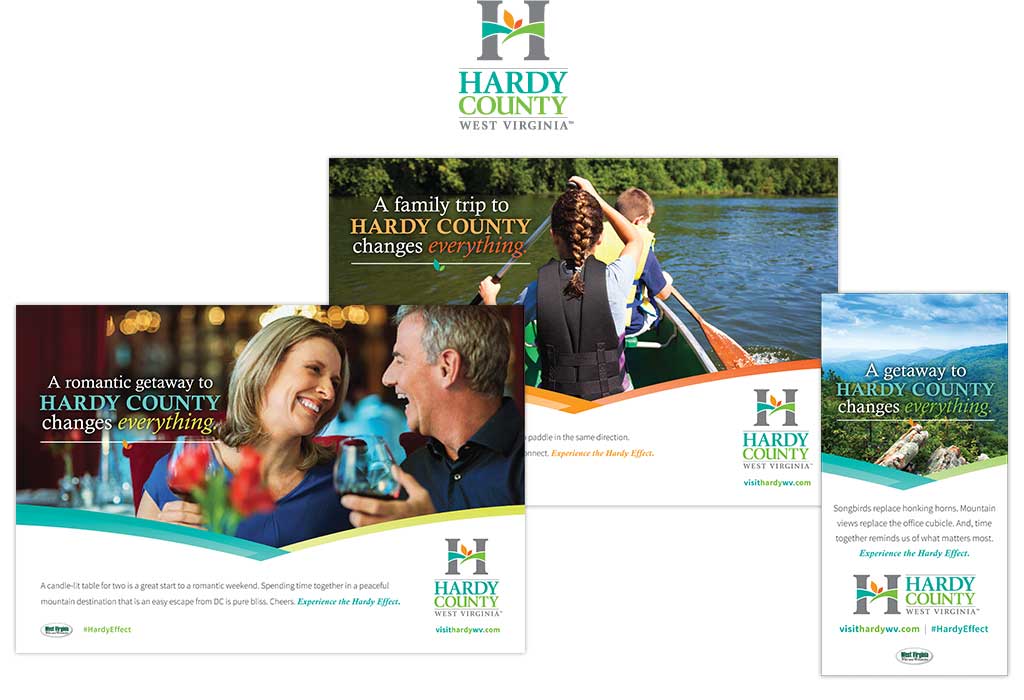 The Hardy County CVB staff and board understood from the beginning the importance of basing strategic decisions on research. They eagerly digested all of the data and ultimately adopted the branding recommendations. We then developed a logo and visual identity for the county.

With the foundation of a good brand now in place, we moved on to developing an ad campaign. Advertising is a creative interpretation of a brand and must contribute to the public’s understanding of it. Our team offered several ideas. Hardy County CVB chose to proceed with a versatile ad concept that supports the “most relaxing getaway in West Virginia” claim while also touting one or more available activities. For example, an ad in the series promoting family getaways features a photo of kids in a canoe along with the message: “A family trip to Hardy County changes everything. Instead of going separate ways, the kids learn to paddle in the same direction. Turn off the phones so your family can truly reconnect. Experience the Hardy Effect.” Each ad in the series makes a bold statement about the benefit of spending time in a mountain paradise like Hardy County.